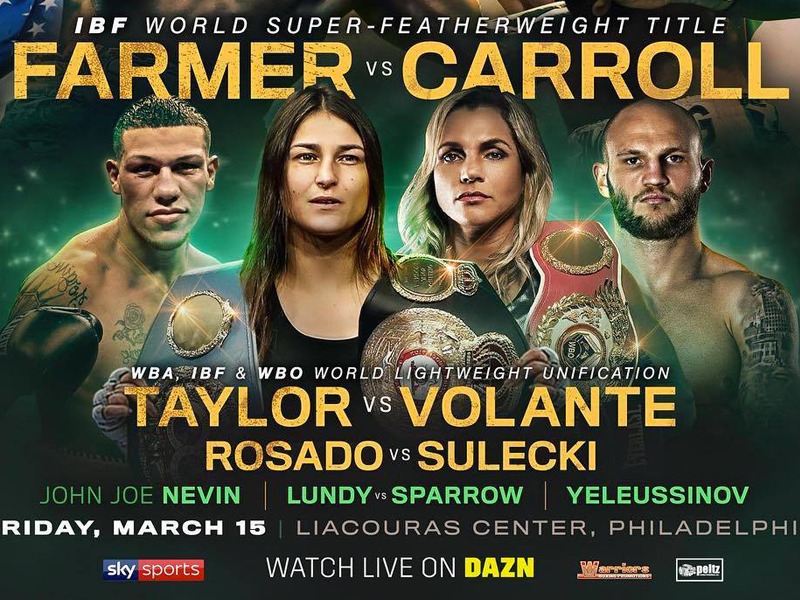 Katie Taylor can take a giant step towards her goal of becoming the undisputed World Lightweight champion when she aims to unify her WBA and IBF titles against WBO ruler Rose Volante. The bout will take place at the Liacouras Center in Philadelphia on Friday, March 15 and will be live on DAZN in the US and on Sky Sports in Ireland and the UK.

Taylor (12-0 5KOs) added the IBF strap to her WBA title in April against Victoria Bustos in Brooklyn, New York, and has since defended the titles three times, stopping Kimberly Connor in three rounds in London in July before shutouts against Cindy Serrano in Boston in October and ending a stunning 2018 by beating Eva Wahlstrom in New York in December.

Volante (14-0 8KOs) has defended her WBO crown twice since winning the vacant title in December 2017 and the Argentine won both her defenses in Brazil 2018 by the halfway point, with Lourdes Borbua retiring after five rounds in April and Yolis Marrugo Franco stopped in three in September.

The champions put titles and unbeaten records on the line in Philadelphia, and the winner will target Belgian WBC ruler Delfine Persoon for all the belts later in the year.

“Ever since I won my first World title as a pro my goal has been to unify the Lightweight titles so this is obviously a massive step towards that,” said Taylor. “Volante is unbeaten so I’m expecting a tough fight but that’s exactly the kind of challenge I want. I think the better the opponent and the bigger the challenge the better I will perform.

“It’s a great card to be on especially with so many Irish fighters on the bill on St. Patrick’s weekend in Philadelphia so I’m sure it will be a special occasion.

“For now my focus is on Volante but of course after that fight I would love to have all the belts as soon as possible. Hopefully the Persoon fight can finally be made for the summer and then there are some other huge fights out there as well for the rest of the year.”

The card is headlined by hometown favourite Tevin Farmer’s defence of his IBF Super Featherweight title against Ireland’s Jono Carroll with a stacked undercard in support of the two World title blockbusters led by a crunch Middleweight clash between Philadelphia’s Gabriel Rosado and Pole Maciej Sulecki and an all-Philadelphia Lightweight clash between Hank Lundy and Avery Sparrow.

Kazakhstan’s Olympic gold medal star Daniyar Yeleussinov (5-0 3KOs) fights for the sixth time in the paid ranks ahead of what promises to be a break out year for the 27 year old, the same of which can be said for two-time Olympian and 2012 silver medalist John Joe Nevin (11-0 4KOs) who joins fellow Irish fighters on the St. Patrick’s weekend bill.

“I can’t wait for March 15 at the Liacouras Center,” said promoter Eddie Hearn. “It’s our first ever event in Philadelphia and it’s an honour to promote in this great city on St Patrick’s weekend.

“Tevin Farmer is one of the great boxing underdog stories of our generation and I’m so happy he is getting the chance to bring that World championship home against a feisty and talented Jono Carroll.

“The biggest star in women’s boxing, Ireland’s Katie Taylor, looks to unify the division against WBO champ Rose Volante. Philly favorite Gabe Rosado takes on Poland’s Maciej Sulecki in a thrilling Middleweight match up and Olympic stars Daniyar Yeleussinov and John Joe Nevin. It’s stacked from top to bottom and it’s going to be an electric night of boxing in Philadelphia.”

Tickets priced from $40 to $150 are available online from The Liacouras Center.