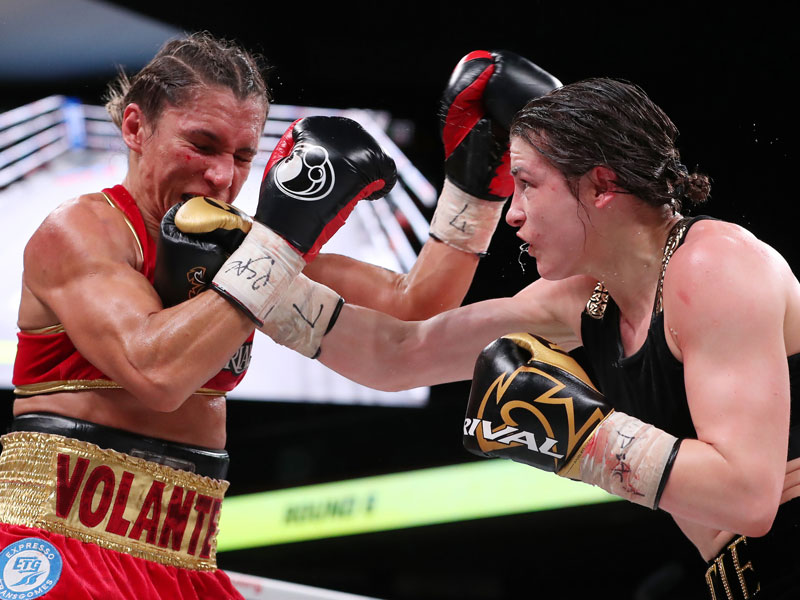 Katie Taylor is just one win away from her dream of becoming the undisputed World lightweight champion following a dominant stoppage win over Rose Volante in Philadelphia last night.

Taylor successfully defended her WBA and IBF Lightweight titles and claimed Volante’s WBO belt when referee Benji Esteves called a halt to what was becoming an increasingly one-sided affair in the ninth round.

Taylor made a blistering start meeting fire with fire as her Brazilian opponent looked to make a fast start. However, a short and powerful right hook sent Volante to the canvas giving her an early indication of the difficult night that lay ahead.

Taylor varied her attacks to head and body as the rounds went by wearing down Volante en route to that penultimate round finish. With Taylor having emerged from the content relatively unscathed the Bray women has now set her sights on a return to Madison Square Garden on June 1st and a bid to become the undisputed champion by relieving Belgium’ Delfine Persoon of the WBC title.

“Firstly I want to thank everyone for all the support tonight,” said Taylor. “The reception I got was amazing. All people have been asking me about recently is fights with Delfine Persoon, Amanda Serrano and Cecilia Braekhus and I understand that because they are all massive fights but I knew Rose Volante was coming to win and that it would be a very tough fight so I certainly wasn’t looking past her.

“There’s just the WBC belt left now so hopefully, Delfine Persoon will agree to the fight and we can put all the belts on the line in New York on June 1st on the Anthony Joshua card at Madison Square Garden.