Taylor stops Gentili to go 3 and 0 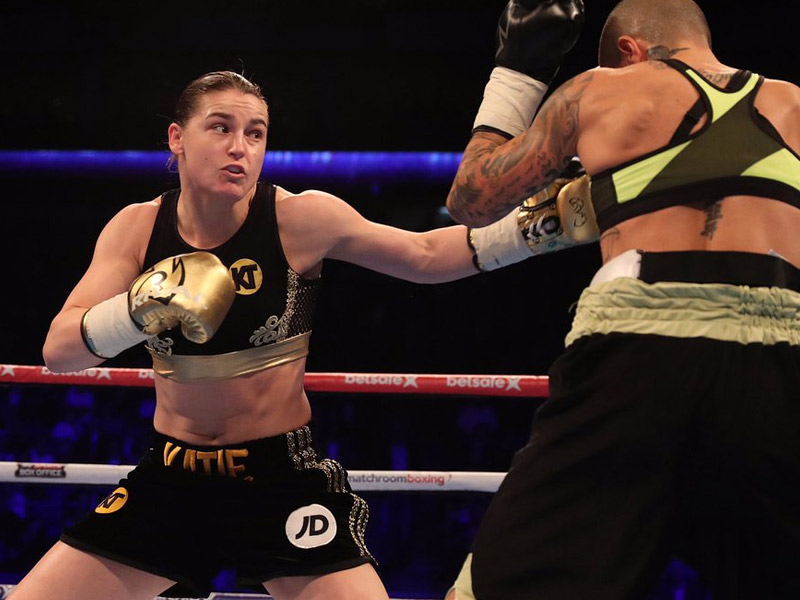 Katie Taylor made it three wins from three in the pro ranks tonight with a dazzling display in front of a sold out O2 arena in London. The Bray woman scored the second stoppage win of her career with a fifth round TKO of game Italian Monica Gentili in a fight which immediately preceded the much anticipated Tony Bellew and David Haye clash.

Taylor dominated proceedings from the opening bell impressing with combinations while wearing down Gentili particularly with repeated left hooks to the body.

It all caught up with the Lazio native in the fifth round as Taylor upped the pace unleashing a volley of punches to send her opponent to the canvas. Gentili rose to her feet but referee Bob Williams had seen enough and waved the fight off.

Following the bout Taylor’s promoter Eddie Hearn confirmed that her next fight will take place at the Manchester Arena on March 25th when she features on the undercard of the World title rematch between Jorge Linares and Anthony Crolla, Following that fight Taylor is likely to return to London to feature on the undercard of the Anthony Joshua – Wladimir Klitschko World Heavyweight title fight at Wembley Stadium before a sell out crowd of over 90,000.

Speaking to Sky Sports following the bout Taylor said, “The body work definitely paid off. She was a tough girl, very durable so it was great to get the stoppage in the end. This was my first fight with a full training camp under my belt and I definitely felt a lot stronger and sharper in there tonight. I felt like I could have fought 10 rounds.”

“I feel like I’m ready to fight for a World title right now but I know I need to get a few ten rounders under my belt and the opposition has to progress as well but it’s back to the gym now on Monday to prepare for March 25th.”