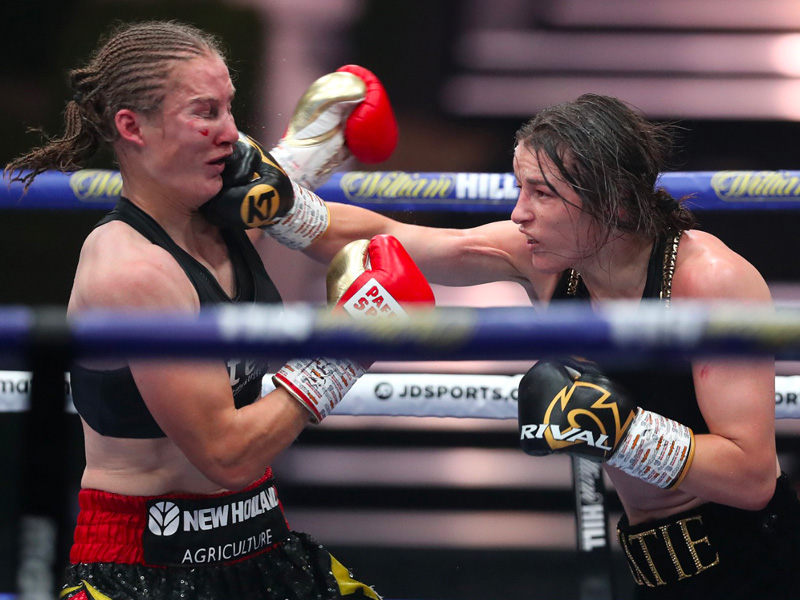 Katie Taylor successfully defended her Undisputed World Lightweight title while improving her perfect professional record to 16 and 0 in the unique and surreal surroundings of Eddie Hearn’s Fight Camp venue on Saturday night.

The Bray woman scored a unanimous decision points win over Delfine Persoon in a rematch of their original meeting at Madison Square Garden in June of last year.

While last years contest was fought in front of a sold out MSG due to COVID-19 restrictions Saturday night’s bout took place behind closed doors at Matchroom Boxing’s HQ in Brentwood, Essex on an event screened live on Sky Sports Box Office and in over 60 countries around the world.

The result however was the same second time around with
Taylor once again emerging victorious over her Belgian rival after another ten round war. As in New York Persoon’s relentless aggression proved her hallmark but Taylor’s superior boxing ability proving the difference between the two fighters.

All three judges scored the fight in the Irish woman’s favour by margins of 98 – 93 on one card and 96 – 94 on the other two scorecards.

Speaking following the bout Taylor said, “I knew it was going to be a tough, tough battle coming into this fight. It’s never going to be an easy battle against Delfine, she is relentless.

“I knew I would have to dig deep at some stages during the fight, but I thought I boxed a lot better than last time. I stuck to my boxing a lot more, even if I got drawn in a few times.”

Unlike their first fight in New York Persoon had no complaints about the verdict on this occasion. She said, “This time I respect the result. For me this time, the weight was a little too much. I didn’t feel like I had enough power to hurt her this time.

I tried to get my weight up but I could not hurt her this time. And if you don’t hurt her, it’s technical and she’s good at moving around. You have to hurt her otherwise she gets away. The power was not enough. I’ve got no problem with this decision and my respect she deserves,” Persoon said.