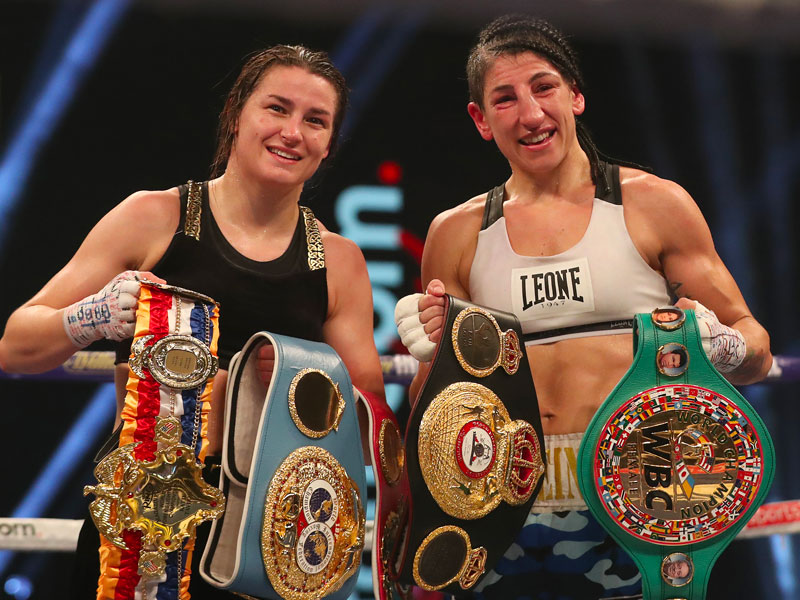 Katie Taylor completely outclassed her WBA mandatory challenger Miriam Gutierrez to retain her Undisputed Lightweight World Titles at the top of the bill on a huge night for women’s boxing.

The Irish star showed her superiority from the opening bell, flooring Spain’s Gutierrez in the fourth round as Taylor sealed a masterful unanimous decision victory with scores of 100-89, 100-90 and 99-91.

“I thought it was a great overall performance,” Taylor told Matchroom afterwards. “I boxed well at long distance and close. I did a bit of everything in there tonight. I threw everything but the kitchen sink at her. I just couldn’t get her out of there. She’s tough as nails so credit to her. She hung in and she was there to fight until the very end. She’s obviously big and strong and that showed tonight.

“I thought it was important for me to stamp my authority right from the first round. She hadn’t fought outside of Spain and was out of the ring for a year. I thought it would be good to start fast. I thought I was going to get her out of there at one stage. She hung in there and she kept swinging shots. She was actually very dangerous when she was swinging shots. I had to be a bit more cautious later on in the fight. Overall it was a great performance.

“Obviously I would have loved to get a stoppage in there tonight. I haven’t got a stoppage in a long time. It is hard to hurt these girls, they’re very strong and durable. I did everything that I could to get the stoppage but she hung in and I have to be happy with a points win. I’m going home with all of the belts and I’m still the undisputed champion. I’m still unbeaten and this is a great end to the year.

“This was absolutely huge. I think every girl on the card tonight boxed brilliantly. Three fantastic fights. It’s just an amazing showcase. As I’ve said before, Eddie has given us this platform. Women’s boxing is on fire right now because of the platform he has given us. What an amazing few years of women’s boxing. That’s what it’s all about for myself, inspiring the next generation. Hopefully there was a few young girls watching through Facebook on the livestream. It’s all about inspiring the next generation and what an amazing platform to do it on.”

Matchroom Sport Managing Director Eddie Hearn said: “What a night and what a monumental moment on Saturday. This huge audience got to see a great night of boxing and a performance of pound-for-pound quality. We have made tremendous strides in women’s boxing but the job is still only half done. Together with these great athletes we will continue to push the boundaries.”

“Rachel Ball produced a fantastic win, the launch pad for her to pursue World Titles, while Terri Harper was composed and clinical in her defence of the WBC Super-Featherweight belt. It was then Katie Taylor’s time to produce a punch perfect display. Simply dazzling.

“Katie is an unbelievable ambassador for the sport and we decided to stream her historic fight night for free, a sign of our long-term commitment to women’s sport with Matchroom. We’ve started something special as we continue to showcase the best talent in women’s boxing on Sky Sports.”

Taylor’s win on Saturday night has also seen her crowned by the Ring magazine as their pound-for-pound number one women’s fighter in the world.

“It’s great to be considered the pound-for-pound number one and it’s a very satisfying way to end the year,” said Taylor. “It’s obviously been a very difficult year for everyone due to the pandemic so it’s been great to have had the opportunity to get two fights in. Hopefully next year I can be even busier. There are so many great fights and challenges out there for me and I’m so excited about what’s to come.