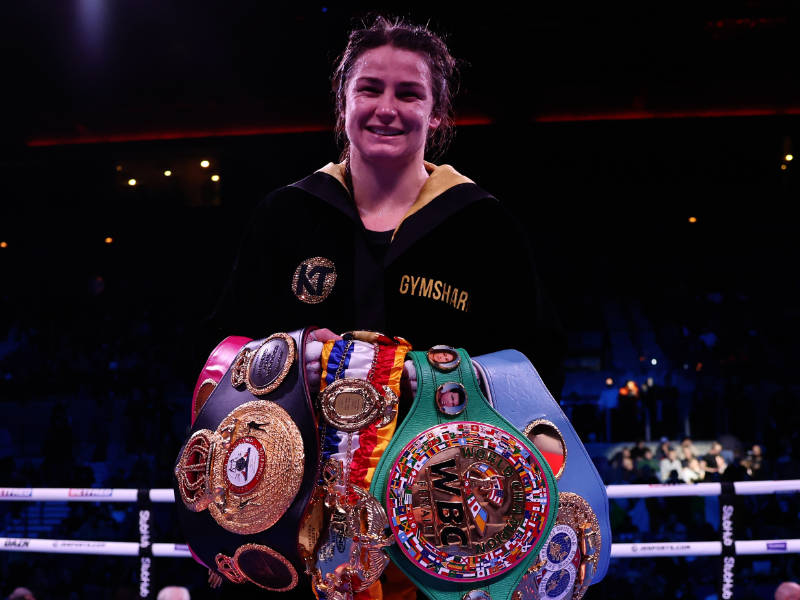 Katie Taylor took her perfect professional record to 20 and 0 in Liverpool last night with another successful defence of her Undisputed World Lightweight titles against WBA mandatory challenger Firuza Sharipova.

Taylor recorded a unanimous decision points win with all 3 judges scoring the fight in her favour by totals of 98-92, 97-92 and 96-93. The defending champion entered the M&S Bank Arena to a rapturous welcome from the Liverpool crowd which also featured plenty of travelling support from Ireland. Sharipova proved a game and wily opponent but Taylor’s greater speed and quality shone through to ensure that victory was never in doubt.

It was the Bray woman’s third win of the year setting her up for some huge fights in 2022. “My performance was ok, there’s weren’t any fireworks tonight,” said Taylor. “She was an awkward opponent, holding a lot on the inside so it was hard to let my punches go. These mandatory challengers can be tricky at times, they are real banana skins so it’s great to get past those type of opponents and it will prepare me for the bigger fights to come.

“I’m still undefeated, still undisputed and going into 2022 with big fights ahead. The better the opponent the better I perform and I’m looking forward to a fantastic year ahead.”

If all goes to plan Taylor’s first fight in 2022 should be the long awaited showdown with Amanda Serrano. Promoter Eddie Hearn is targeting a potential April date in New York for the clash to finally take place. “The world has been waiting for that fight for a long time now,” said Taylor. “There’s been a lot of talk about it for a few years. It’s been scheduled a couple of times before and fallen through for whatever reasons on their side. In my opinion it’s the biggest fight in women’s boxing and potentially for it to take place at Madison Square Garden, the most iconic venue in the sport would be very special.