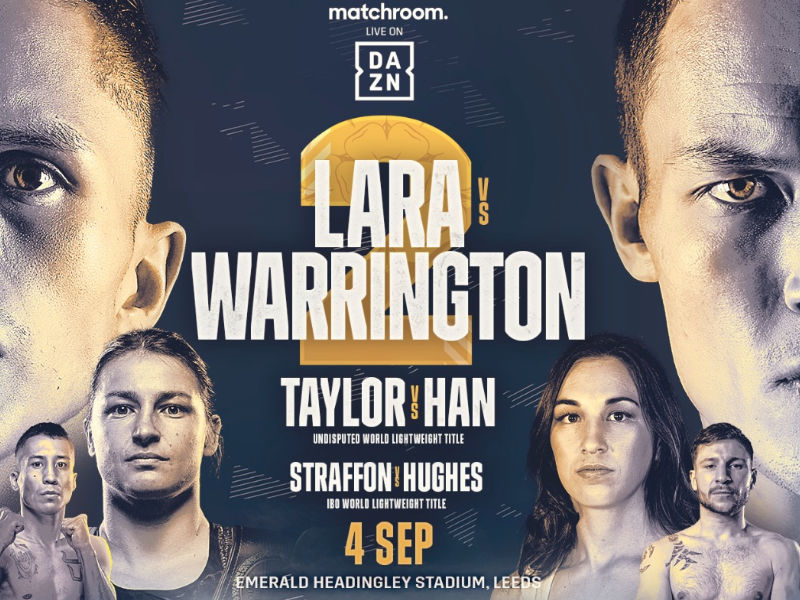 Undisputed World Lightweight Champion, Katie Taylor returns to the ring at Emerald Headingley Stadium in Leeds on Saturday, September 4th when she defends her titles against mandatory challenger Jennifer Han live on DAZN. The Bray woman, undefeated in 18 fights since turning professional in 2016 will defend her WBC, WBA, IBF, WBO and Ring Magazine crowns against the Texan based Han (18-3-1, 1 KOs).

Up to 20,000 fans are expected to be in attendance in Leeds on a massive night of boxing which also features local hero Josh Warrington looking to avenge his recent defeat to Mexico’s Mauricio Lara.

“I’m really excited to defend my titles in front of a live crowd again and especially in Leeds,” said Taylor. “I grew up as a Leeds United fan so it’s fantastic to see them back in the Premier League and doing so well again. My last few fights have effectively been behind closed door and it’s definitely a strange experience so I think to have crowds back again and outdoors in Leeds will make for a very special atmosphere. I’m back in the US in training camp, working hard and focused on putting in another big performance against a tough and experienced opponent on September 4.”

Taylor was forced to dig deep as she retained her World Titles via a unanimous decision victory after another memorable meeting with Natasha Jonas last time out at Manchester Arena in May – nine years on from their London 2012 Olympic Games bout. Han, a six-time national amateur champion fighting out of El Paso, Texas, won the vacant IBF Featherweight World Title against Helen Joseph in September 2015 and went on to make four defences of her Title – most recently against Lizbeth Crespo in February 2018. “I want to thank Katie for this opportunity,” said Han. “Enjoy your belts while you still have them. I will see you in September.”

“What better way to celebrate the return to normality for boxing than 20,000 passionate Leeds fans at Headingley Stadium”, said Eddie Hearn, Matchroom Sport Chairman. “This is the biggest fight of Josh Warrington’s career and this time he has his city behind him in a must win fight that can only be a thriller. The greatest female fighter of all time Katie Taylor faces Mandatory Challenger Jennifer Han in another great fight. Katie is a lifelong Leeds United fan and I know how excited she is to fight in the city. Another Mexican upsetter Jovanni Straffon tries to derail the fairy tale story of Yorkshire’s Maxi Hughes who looks to take a giant leap in the World Lightweight landscape. There’s plenty more additions to be announced shortly in what will be a huge night of boxing live on DAZN.”