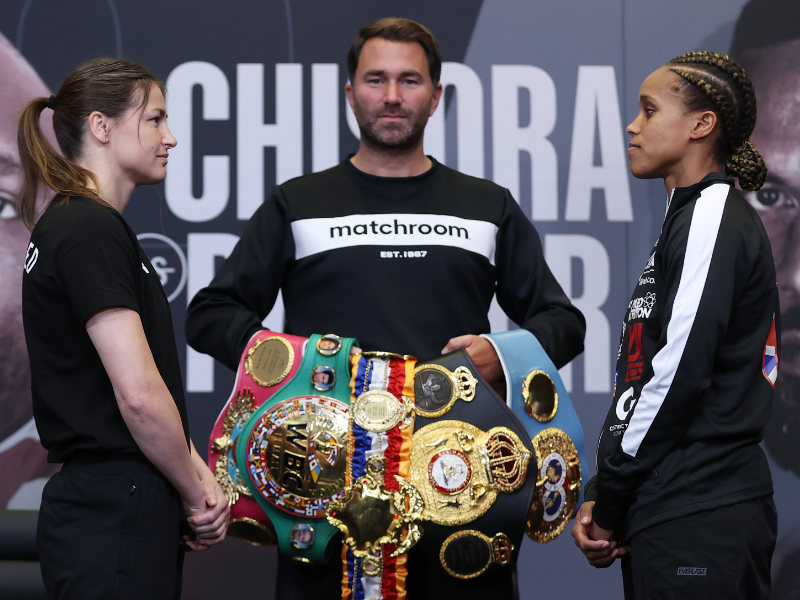 Katie Taylor and Natasha Jonas have weighed in ahead of tomorrow night Undisputed World Lightweight title fight at the AO arena in Manchester. The two last met in London in 2012 with Taylor emerging victorious in their Olympic quarter final before going on to win a Gold medal for Ireland

While confident of a similar result Taylor believes their meeting in the professional ranks will prove a very different encounter. “That fight was nine years ago, we were both very different fighters to what we are now,” said Taylor.

Taylor has raced to a perfect 17-0 record since turning professional late in 2016. The Bray woman has swept all before her en route to winning the WBA, IBF, WBO, WBC and Ring magazine Lightweight titles while she also captured the WBO Super Lightweight title.

Her Undisputed Lightweight titles will be on the line on Saturday night and Taylor is relishing what on paper appears to be another big challenge for her. “We don’t take any easy fights,” said Taylor. “I’m in this sport to fight the best, in terms of training camps every one’s the same, we train for every single fight as if it’s going to be my hardest. My mind set and mentality doesn’t change fight to fight so I’m looking forward to a great fight on Saturday.”

Taylor’s confidence was echoed by her trainer, Ross Enamait. “We’re here to win the fight,” declared the Connecticut native. “We train hard for every fight. This is Katie’s twelfth World Title fight; this is Jonas’ twelfth fight period. Every fight is a big fight for us, we’re coming to win and we’re here to win on Saturday.

Jonas says she is relishing her role as the underdog as she looks to avenge that Olypmic defeat from 2012. “Every time I’m asked to step up, I do, and I perform,” said the Liverpudlian. “Being the underdog for me is no different, I’m always the underdog on the big night. The more you tell me I can’t do it, the more I’ll prove you that I can.

“I think in boxing one punch changes everything. I do believe I have power; I don’t want to make prediction or disrespect anybody by saying that. If I get that opportunity, it’ll be the end of the fight.”

The fight will be live on Sky Sports Box Office in Ireland and the UK and on DAZN in the US and most other territories around the world. Taylor and Jonas are expected in the ring shortly after 9:30pm.