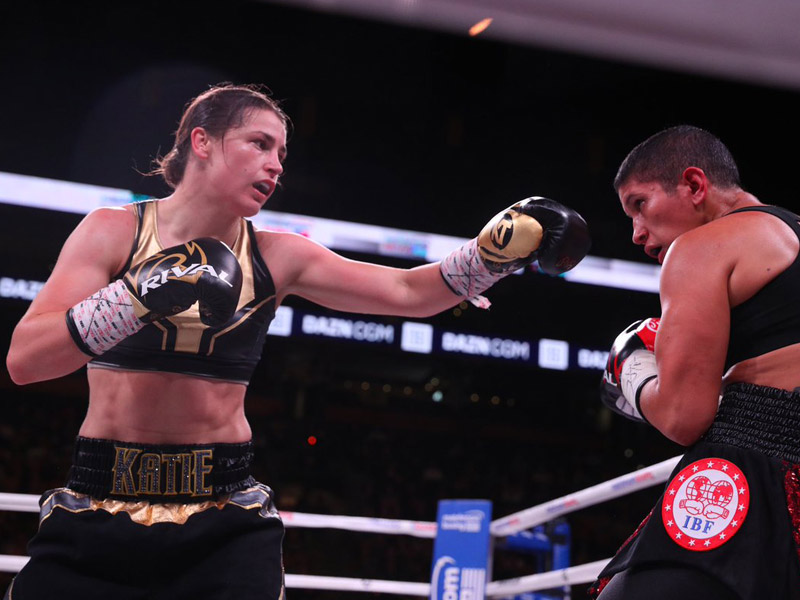 Katie Taylor retained her WBA and IBF World Lightweight titles at the TD Garden in Boston last night with a landslide points win over Cindy Serrano.

The Bray woman was roared on by a large Irish contingent at the home of the Boston Celtics and Boston Bruins en route to handing Serrano her first defeat in over 6 years.

The champion was in complete control against Serrano who offered little or nothing in the way of attacking intent throughout the fight.

Taylor stalked her opponent throughout keeping the New York based Puerto Rican on the back foot and dominating proceedings with good work to the head and body.

With very little coming her way in return Taylor even resorted to some uncharacteristic showboating in the seventh round in a bid to draw some return fire from Serrano.

Serrano remained in her shell however with the referee even warning her that he would stop the fight in the final round if she didn’t fire back. Taylor continued to dominate proceedings until the final bell with all 3 judges awarding the Irish woman every round.

The win brings Taylor’s perfect professional record to 11 straight wins and she hopes to return to the ring in December for a final outing to end what has so far been a very productive 2018.