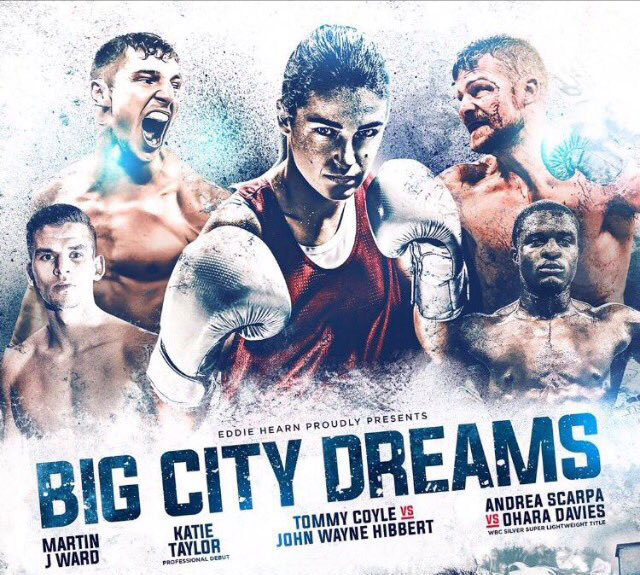 Amateur sensation Katie Taylor has signed with Matchroom Boxing and will make her professional debut at The SSE Arena, Wembley in London on November 26, live on Sky Sports.

Taylor’s astonishing success in the amateurs sees her widely regarded as the outstanding Irish athlete of her generation with her 15 year career garnering five World titles, six European titles and Olympic gold at the London 2012 games where she was her nation’s flagbearer.

The 30 year old from Bray now turns her attentions to conquering the paid ranks and her path to World titles begins in London on November 26 before a second pro outing before the end of the year at the Manchester Arena on December 10 on the undercard of the IBF World Heavyweight title defence of fellow gold medal star Anthony Joshua MBE.

“When I first dreamt of Olympic gold, female boxing was practically unknown,” said Taylor. “Now because of my journey and the incredible supporters who came along with me, female boxing is as much part of the fabric of the Olympics as its male counterpart. Now I want to do the same for the professional sport and I hope those who have supported me along the way will come along with me. I’m excited for the road ahead.”

Taylor’s manager Brian Peters said: “I’m delighted to have the opportunity to work with Katie again. She’s is undoubtedly one of Ireland’s greatest ever athletes, a national treasure and a true pioneer for women’s sport. She was hugely instrumental in getting women’s boxing into the Olympics and now she wants to make a similar impact on the professional side of the sport.”

“Today marks a significant day for our sport with the news that Katie is joining the professional ranks,” said promoter Eddie Hearn. “She is one of the most decorated amateur boxers of all time and a public icon in Ireland. I met Katie for the first time last week and was fascinated by her desire to not just win World titles but to break down the barriers of women’s boxing, she is an incredible role model.

“Boxing is a sport open to all but it’s also an entertainment business. Anyone who has watched Katie fight knows how exciting she is and anyone who hasn’t is really going to enjoy her journey on Sky Sports. I’m really excited by this challenge and we are committed to giving Katie the opportunities she needs to achieve her dreams.”

Sky Sports Head of Boxing Adam Smith said: “Katie is an outstanding boxer and this is great news for her and all the fans who have followed her incredible career. She has shown what an inspiration she is to young people through her role as a Sky Sports Living For Sport ambassador, and we’re very excited for her first professional fight live on Sky Sports in November.”

Taylor’s debut comes on a huge night of action in London as Tommy Coyle and John Wayne Hibbert clash in a must-win Super-Lightweight battle. The all-action pair know that victory is paramount if they are to continue to hunt major titles, with Hull star Coyle looking to get back into contention for the British title after being edged out by Tyrone Nurse and former Commonwealth champion and Essex favourite Hibbert keen to reignite his career after a disappointing outing in the summer.

Tickets go on general sale at midday on Friday October 28, with tickets priced £40, £60 and £100 available from www.ssearena.co.uk or by calling 0844 815 0815. £150 VIP tickets are available exclusively via www.matchroomboxing.com