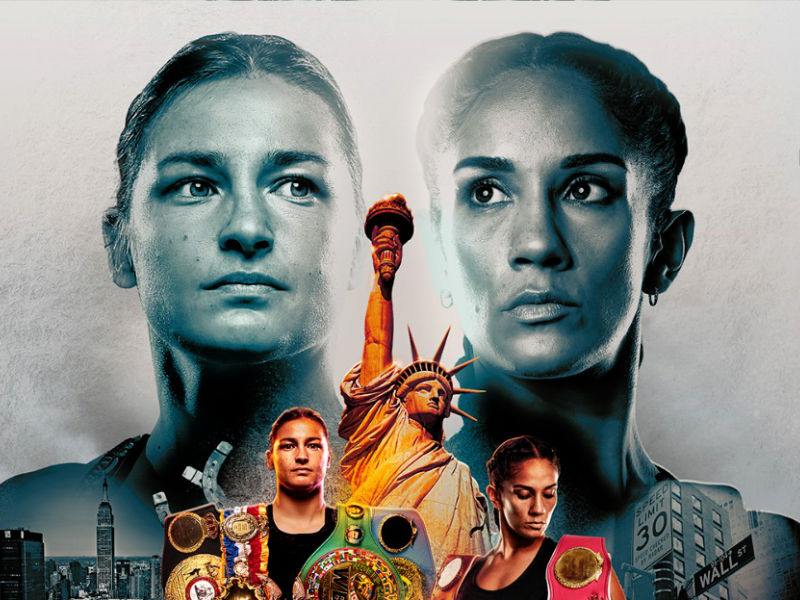 Katie Taylor and Amanda Serrano are set to make history in an epic battle for Taylor’s undisputed Lightweight title at Madison Square Garden in New York on Saturday April 30, live worldwide on DAZN.

Years in the making, the biggest fight ever in women’s boxing between the pound-for-pound #1 and #2 fighters of the world is one that will not only make boxing history, but women’s sports history. MSG has hosted thousands of fights through its illustrious years, beginning more than a century ago on July 17, 1882; now, 140 years later, this matchup finally marks the very first time two female fighters are headlining a combat sports event at ‘The World’s Most Famous Arena’.

Irish icon Taylor (20-0 6 KOs) puts all the Lightweight belts on the line for the sixth time since winning them in June 2019 in a war with Delfine Persoon and seeing off the Belgian in a rematch in England before repelling the challenges of Miriam Gutierrez, Natasha Jonas, Jennifer Han and Firuza Sharipova – and there’s added spice to the fight as Taylor holds a win over Amanda’s sister Cindy in Boston back in October 2018.

Puerto Rican sensation Serrano (42-1-1 30 KOs) already has an unrivalled legacy in the sport as a seven-weight World champion. The Brooklyn based champion enters the momentous bout in sparkling form after knocking out Daniela Bermudez last March, dominating Yamileth Mercado in August and overpowering Miriam Gutierrez in two separate cards co-starring Jake Paul. Amanda was the 2021 Female Fighter of the Year for DAZN, ESPN and WBC among others.

“This is a fight I’ve wanted for a long, long time and I’m just excited for it to finally take place because these are the kind of fights I’m in the sport for,” said Taylor. “People have been talking about this fight for years and there have been times I wondered if it was ever going to happen so I’m very grateful to Eddie Hearn, everyone at Matchroom, DAZN and Madison Square Garden for getting it over the line.

“When I turned professional my goal was to be involved in huge events like this so to headline at Madison Square Garden in a fight of this magnitude is really the pinnacle of the sport. It’s such an iconic venue and has been home to so many of the historic moments in boxing and I truly believe this will be another one.”

“It is a dream come true to have the opportunity to headline Madison Square Garden and do so against one of the greatest boxers of all time in Katie Taylor,” said Serrano. “Since I was a young girl, my only boyfriend has been boxing. I have dedicated my life to him, and this event makes that commitment worth every minute. On April 30th I am going to make history for me, for my team, for my family, for Puerto Rico, for every Latina and Latino and for all women worldwide.”

From the moment Katie Taylor stepped into my office, this is the moment we always dreamed of,” said promoter Eddie Hearn. “The moment the world would stop and watch and watch the two greatest female fighters on the planet headline at the Mecca of boxing, Madison Square Garden.

“Taylor vs. Serrano is a fight for the history books. Yes, it’s the by far the biggest female fight of all time but it’s also one of the biggest fights of all time, the undisputed World and Olympic champion against the seven division World champion.

“Both fighters deserve credit for getting this fight made, as does Jake Paul and his team at Most Valuable Promotions, DAZN and Madison Square Garden – together we’re going to put on a special night in New York and create a fitting spectacle for these trailblazers to shine.”

“We are honored to be a part of this historic event, headlined by two historically dominant women. Bringing attention to women’s boxing has been a priority for us and Saturday April 30th is a major milestone for not just the sport but girls globally who deserve equal opportunity,” said Jake Paul and Nakisa Bidarian, Co-Founders of Most Valuable Promotions. “We expect a battle for the ages and have the utmost respect and admiration for Katie Taylor. But make no mistake, we are standing next to Amanda Serrano and know she will prove to the world that she is the pound-for-pound greatest female boxer to ever enter the ring. This is more than a fight, this is for forever.”

“This is without question the biggest fight ever in women’s boxing,” said Ed Breeze, DAZN EVP, Rights. “Katie Taylor is a trailblazer in the sport, with a perfect amateur record and pivotal in catapulting women’s boxing into the mainstream. Serrano is a true legend and will be Taylor’s toughest test to date. This fight will be spectacular and also one for the history books, and we’re thrilled to deliver this exciting moment in boxing and sports history to DAZN subscribers across the world.”

As the first ever women to headline at Madison Square Garden, Taylor and Serrano will come face-to-face in the Big Apple on the first leg of a global press tour next Wednesday, February 2 – timed in honor of National Girls and Women in Sports Day, a day of observance in the U.S. acknowledging the accomplishments of female athletes and recognizing the importance of equal opportunities in sport for girls and women. Billie Jean King – tennis icon, equality champion, and Women’s Sports Foundation founder – is delighted that the fight will take center stage at the legendary arena.

“The Taylor vs. Serrano fight at Madison Square Garden is historic and it is only fitting it is being held in the venue that has hosted so many important championships in sports,” said King. “These two women are breaking barriers and opening doors for others by being the main event and not the undercard, fighting for one of the biggest paydays in boxing and showing everyone that if you can see it, you can be it.”

“Saturday, April 30 will be another historic night of boxing at Madison Square Garden,” said Joel Fisher, executive vice president, MSG Marquee Events. “The Garden has been home to some of the most iconic events in the history of boxing, and Amanda Serrano and Katie Taylor will usher in another legendary night, becoming the first women to headline a show at the ‘Mecca of Boxing’. We wish them both good luck and congratulate them on this groundbreaking achievement.”