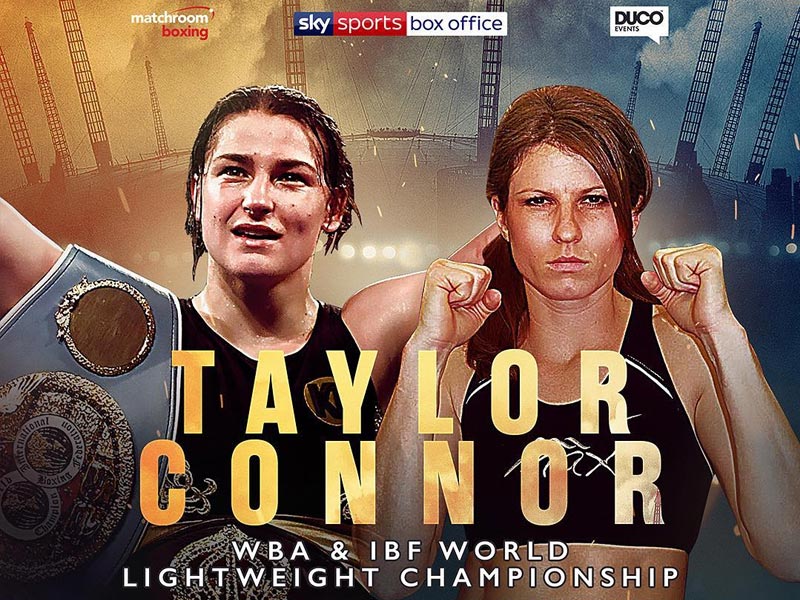 Katie Taylor returns to the ring at The O2 in London on July 28th live on Sky Box Office when she defends her WBA and IBF World Lightweight titles against mandatory challenger, Kimberly Connor. The fight will ensure a quick return to the ring for the Bray woman following her thrilling win over Victoria Bustos in Brooklyn in April which saw her unify the WBA and IBF titles.

That victory in the Big Apple meant that the Bray woman inherited Bustos’ mandatory obligations ensuring that Texan, Kimberly Connor is her next challenger. The bout will be Connor’s second crack at World honours having previously tackled Bustos in Argentina in March of 2017. The fight will be Taylor’s tenth since turning pro in late 2016 and her fifth in the city where she won Olympic Gold in 2012.

The July 28th event at The O2 is headlined by the heavyweight clash between Dillian Whyte and Joseph Parker and will be live on Sky Sports Box Office. The undercard also features Kell Brook facing Brandon Cook in a World Super-Welterweight title eliminator, an eagerly awaited rematch between Conor Benn and Cedric Peynaud and a big step up in class for Olympic medallist Joshua Buatsi when he fights Ricky Summers.

Tickets are on sale now to O2 Priority members at www.theO2.co.uk. Tickets go on sale on Thursday, June 14 at 10 am to Matchroom Fight Pass members via www.StubHub.com and the venue and AXS pre-sale before tickets go on general sale atwww.theO2.co.uk.