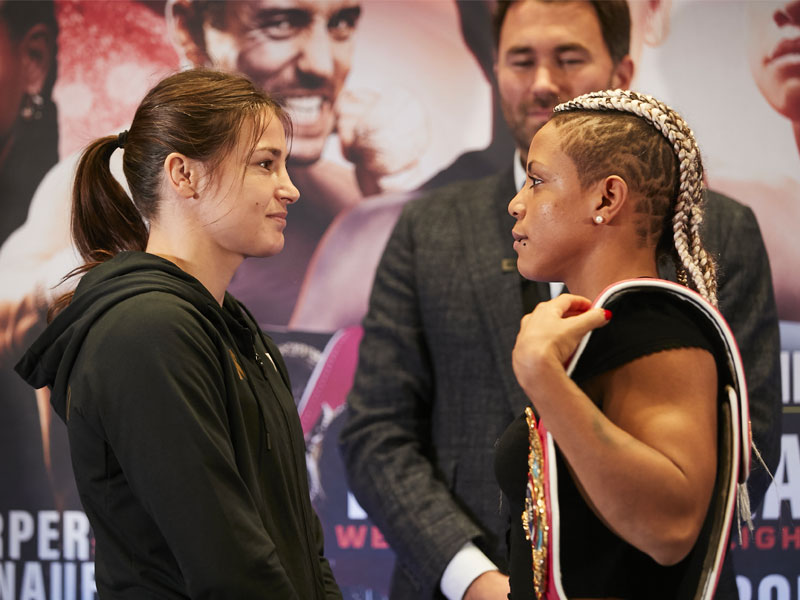 Fight week is well and truly underway in Manchester ahead of Katie Taylor’s bid to become a 2 weight World Champion at the Manchester Arena on Saturday night.

Following a public workout in the city last night Taylor and her opponent, Christina Linardatou came face to face at Stoller Hall today for the final pre fight press conference.

The bout will see Taylor, the Undisputed World Lightweight Champion move 5 pound north on the scales to challenge Linardatou for her WBO Light Welterweight title.

Today’s press conference came 18 years to the day that Taylor made her first mark in the history books by winning the first ever sanctioned female bout in Ireland in 2001.

The Bray woman continues to break barriers with Saturday’s event the first the first time that a female bout will have headlined a boxing event at the UK’s biggest indoor arena.

“I have the chance on Saturday to become a two-weight World Champion and I am very prepared for this fight,” said Taylor.

“I have had a long training camp, the longest one I have had for a professional fight so I am feeling strong. These are the kind of challenges that I relish and I’m expecting a very tough fight, she is the Champion and I am the challenger but I am ready.

“I am in there with bigger and stronger girls now but I have put in hundreds of rounds of sparring these last few years and I am prepared for this kind of challenge.

“I have put in a lot of strength and conditioning work and I can’t wait to get in there now. There is a lot of big fights out there for me but I am only focused on Christina at the moment and I have to get past her first.”

Linardatou who was born in the Dominican Republic but now lives in Greece is confident of returning home with her title. “I am always ready and I am not getting out of the gym because I am preparing myself. This is what I love and I am ready for any challenge! I can handle everything and will do everything I need to do on Saturday to get the win.”

Speaking at the press conference promoter Eddie Hearn said, “This is a groundbreaking fight for Katie Taylor, moving up to 140 pounds to take on the WBO World Champion Christina Linardatou in a very tough fight after becoming the Undisputed World Champion at Madison Square Garden in June.”

The event will be broadcast live on Sky Sports in Ireland and the UK and on DAZN in the United States. Looking ahead to the night Sky Sports head of boxing Adam Smith said, “What a wonderful turnout which it always seems to be in Manchester which is a fantastic fight city. We have been coming here for 25 years on Sky and have seen some wonderful events in the Arena.

“Katie Taylor is a wonderful ambassador for the sport who has a real tough ask moving up in weight to face Christina who will definitively want to hold on to that title.”