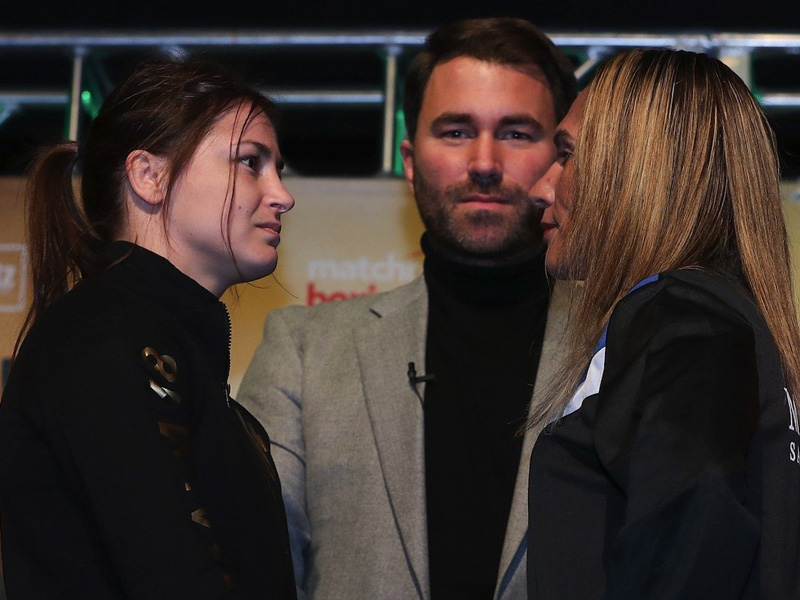 The countdown is on ahead of Katie Taylor’s unification clash with Rose Volante at the Liacouras Center in Philadelphia on Friday night. Taylor will be putting her WBA and IBF Lightweight titles on the line with Volante’s WBO belt also up for grabs meaning that the winner will hold 3 of the 4 World Lightweight titles.

Fight week got underway yesterday with a media workout ahead of today’s press conference where the two fighters came face to face before a respectful handshake.

Addressing the media Taylor said, “It’s great to be here in Philadelphia. There’s such a rich history of boxing here in this city and I’m so excited to fight here. I’ve had a great training camp over the last few months so I’m just ready to fight now at this stage. I’m looking forward to a great challenge on Friday night against Rose Volante. I’m sure she’s ready for the challenge as well and you’re going to see the best of women’s boxing. I can’t wait, so enjoy the show.”

Speaking via a translator Volante said, “I’m very thankful for the opportunity to accomplish my dream of unifying the titles in the biggest fight of my career. Friday night we will see who the best lightweight is in the world.”

Since turning professional in October of 2016 Taylor has racked up 12 straight wins while Volante who travelled to the London 2012 games as a reserve is also unbeaten in her paid career having racked up 14 straight wins en route to winning the WBO title on the road in Argentina last year.

Friday night’s fight will be live on DAZN in the US and on Sky Sports in Ireland and the UK as part of a World title fight double header which also features Ireland’s Jonno Carroll challenging Philadelphia native Tevin Farmer for the IBF Super Featherweight title. The fight card also includes Taylor’s former amateur teammate and Olympic Silver medalist John Joe Nevin.